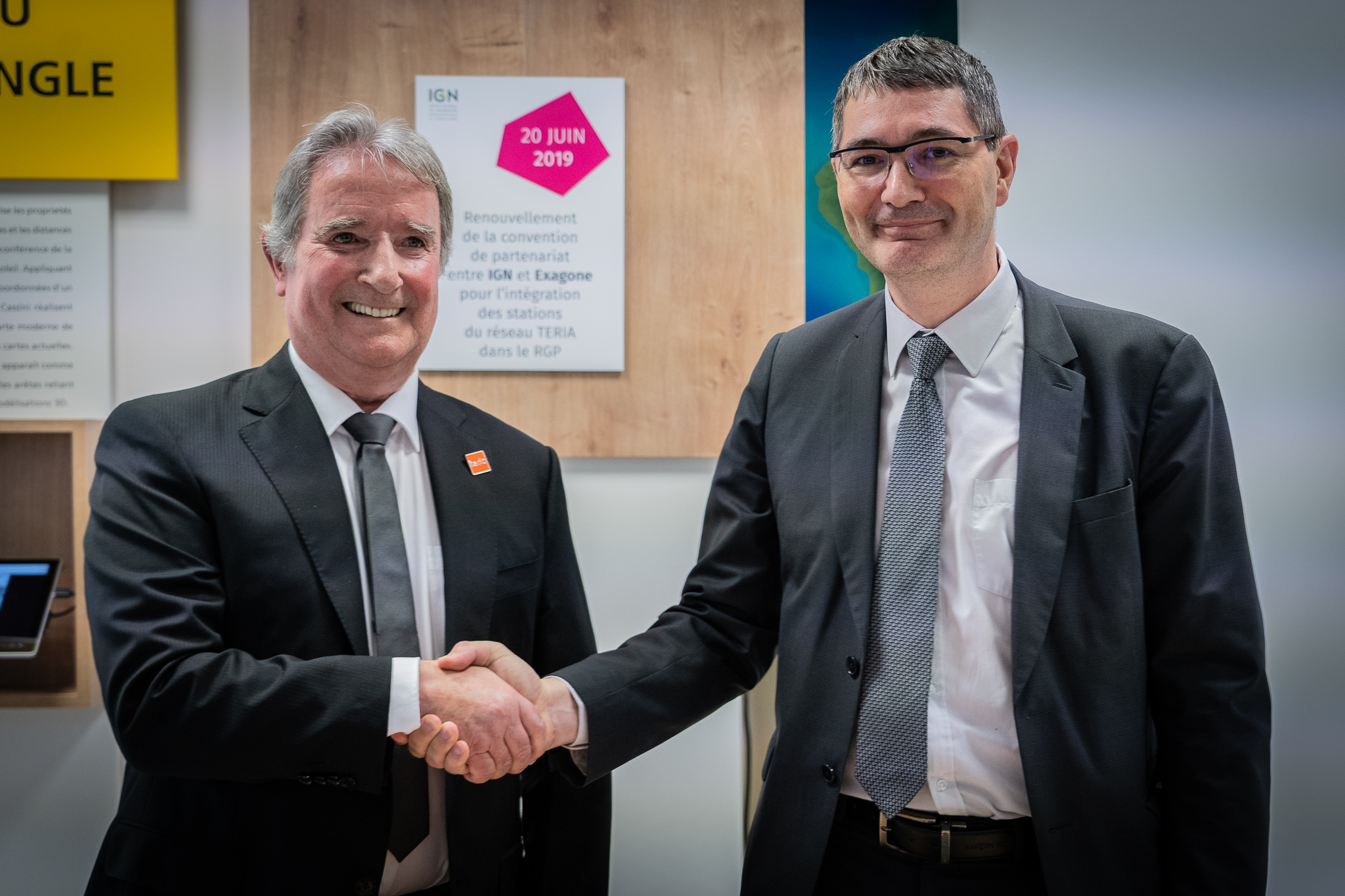 On June 20, EXAGONE and IGN were at Georoom for the signing of the RGP partnership.

IGN and EXAGONE, initiated by the “Ordre des Géomètres-Experts” (OGE), renew their partnership agreement for the integration of TERIA network stations into the permanent GNSS network, all geodetic reference stations positioned continuously by satellite that regularly record and transmit their observation data. This group, coordinated and federated by the IGN, currently has 526 stations operated by some 50 partners in metropolitan France and overseas collectivities. As an instrument for monitoring the territory in the service of the scientific community, the RGP thus makes it possible to contribute to the monitoring of mean sea level, to observe the uplift of the Alps, or seismic movements in Mayotte.

The Permanent GNSS Network (PGN) is a tool for the geodetic community and geographical information. It allows any survey carried out by GNSS to be positioned in the national coordinate reference system. This use is mandatory for all producers of geographical data (decree n°2019-165, dated 5 March 2019).

Since its creation in 1998, the PGN has been conceived as a federative network. The IGN has 25 stations of its own and offers all permanent station managers the opportunity to join the PGN via a partnership to benefit from the IGN’s services: provision of expertise, determination of the station’s official coordinates in the national coordinate reference, regular monitoring of the station, quality control of the recorded data, monitoring of their geometric stability and finally, free and open dissemination of the collected GNSS data.

EXAGONE develops, maintains and operates more than 200 stations of the TERIA network spread throughout the national territory. Thus forming the largest quantitative network in the PGN, which currently has 526 stations. EXAGONE offers its subscribers a real-time GNSS positioning service with centimetric accuracy.

Since May 2018, the Mayotte archipelago has experienced an almost uninterrupted series of seismic events of significant amplitude. It is the geodetic observations made thanks to the 4 PGN stations (one CNES station, two TERIA stations and one Lél@ station) located on the island. These observations have highlighted a significant displacement of Mayotte since July 2018, at a rate of about 1.5 cm/month towards the east and 1.2 cm/month in vertical direction (corresponding to a depression of the island). These geodetic observations led geophysicists to formulate the hypothesis of a volcanic origin in November 2018. This hypothesis has been confirmed by the discovery of an underwater volcano last May, about 50 kilometres east of Mayotte, during an expedition of the oceanographic vessel Marion-Dufresne.

Following a call for projects from the CNRS, IGN and EXAGONE have joined forces with other partners1 to contribute, through GNSS geodetic observations, to the understanding of the phenomenon under way in Mayotte. New stations have been set up in Mayotte and the surrounding areas (Glorious Islands, Madagascar). The acquired data are made available to the scientific community for studies and analyses in a crisis management context, thus the IGN is fully in its role as a federator of the geodetic community by providing the infrastructure of the PGN. The system set up within the framework of this CNRS call for projects could in the future be replicated in the event of a land-based crisis in other territories.