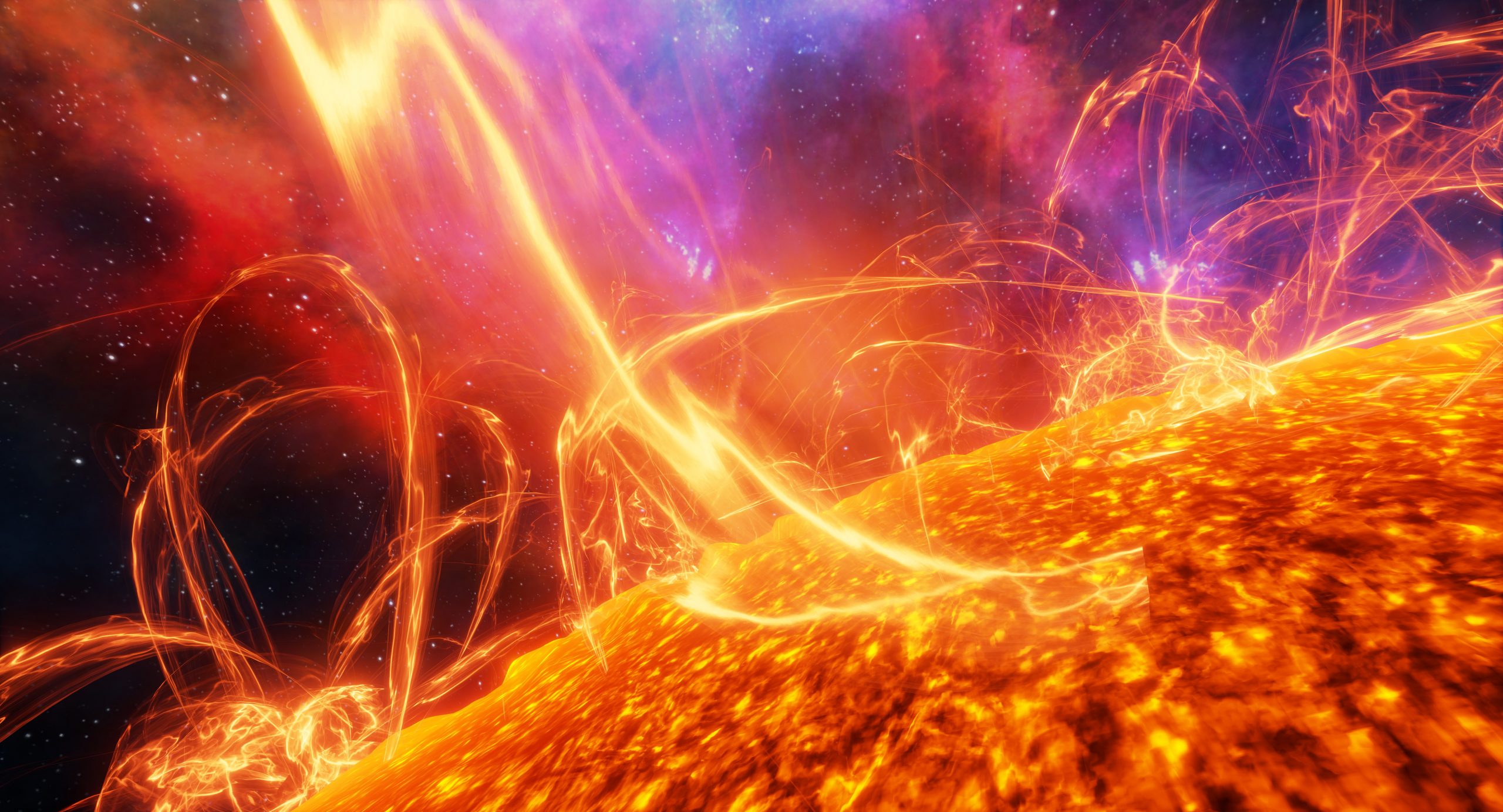 High solar activity: what consequences for your GNSS device?

By L'équipe TERIA9 June 2022No Comments

On 30 March 2022, our Sun emitted a powerful flare. This phenomenon is impressive. These geomagnetic storms strongly disturb the electronic equipment in our daily life: satellites, telecommunication and geolocation network…

What are the real consequences on GNSS instruments? How to prevent the disturbances and continue surveying in the field?

As with any star, the Sun’s activity is permanent, with regular expulsions of huge bursts of material called solar flares.

The Sun has what is known as a “solar corona“, which is made up of plasma, a completely ionised gas whose temperature is higher than its surface temperature. During solar flares, jets of plasma, magnetic waves and charged particles are expelled into interstellar space at speeds of up to 2 000 kilometres per second.

Solar flares are all different in power and last from minutes to hours. The impact on our planet depends on their intensity. For this reason, space weather services monitor and assess them. 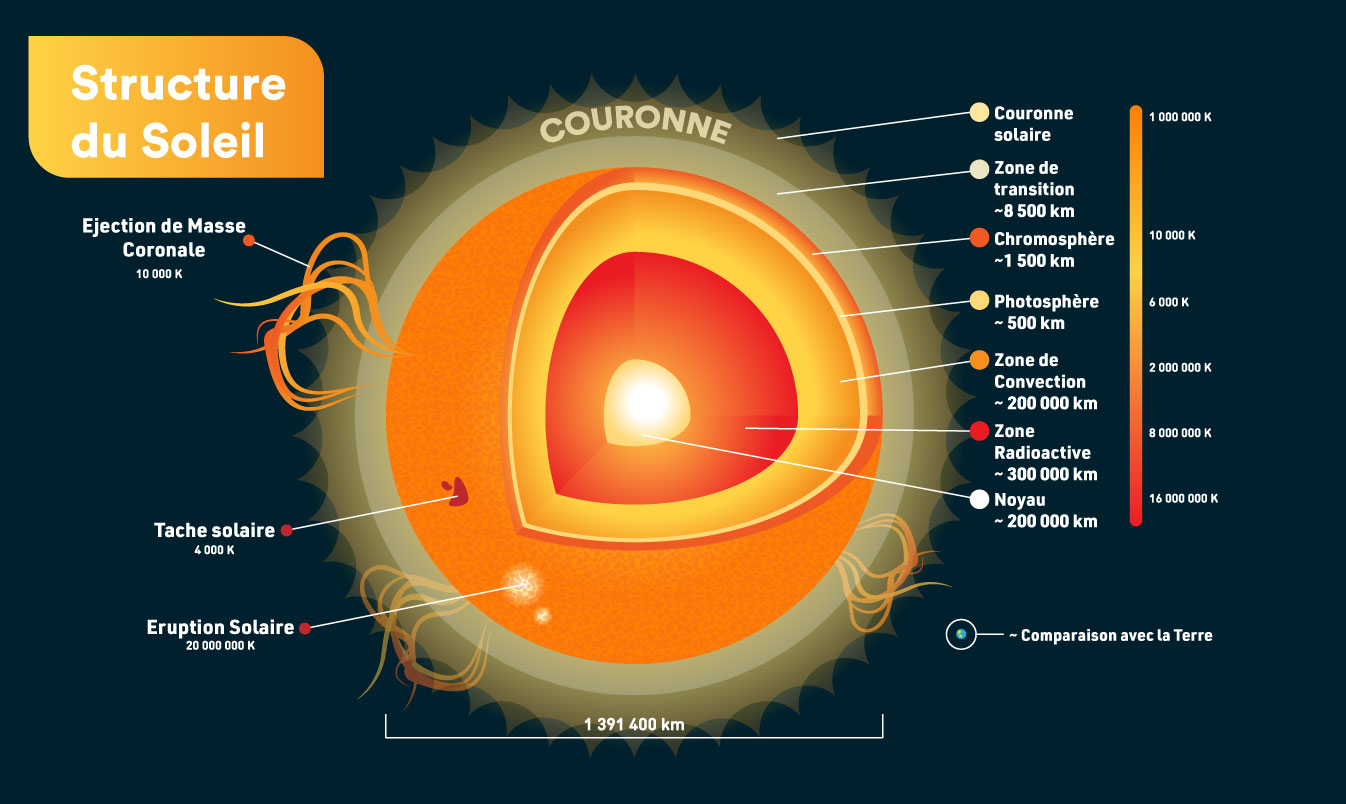 Solar flares are rated according to their intensity (watts/m²) on a scale similar to the Richter scale in seismology.

They are classified into six categories, A, B, C, M and finally X and X10 for the most powerful (the solar flare of 1859, known as the Carrington event). Each category corresponds to an intensity 10 times greater than the previous class. To this alphabetical value is added an identity coefficient ranging from 1 to 9.

Powerful solar flares of the M and X classes can cause coronal mass ejections (CMEs). CMEs have their own magnetic fields. CMEs can then cause magnetic field disturbances. When they head towards Earth, they can have effects on our planetary environment.

These giant bubbles change the atomic characteristics of the solar wind. The solar wind travels through interstellar space in all directions including the Earth.

The weakened shield then becomes temporarily permeable to certain solar emissions. When coronal mass ejections occur one after the other in the direction of the Earth, the effects on the Earth’s environment and our technological equipment can be very significant. 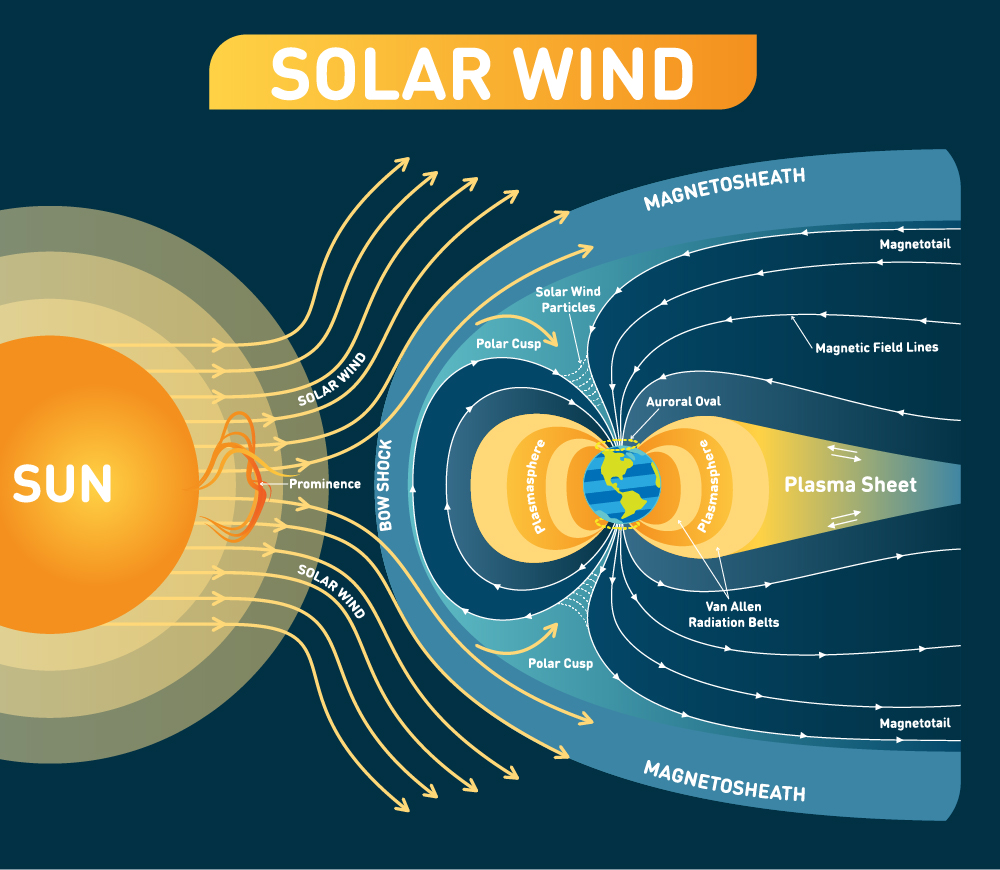 In general, the vast majority of the particles emitted by the solar wind are blocked by the Earth’s magnetic field and therefore have no effect. This phenomenon is visible on Earth in the areas near the poles and is known as the ‘polar aurora’.

However, since the beginning of the year, the Sun has been experiencing coronal mass ejections (CMEs) on an almost daily basis, according to the National Oceanic and Atmospheric Admistration. And the frequency will continue to increase. Why is this happening?

Like the Earth, the Sun is subject to a rhythm of seasons that follow one another almost constantly. We speak of a Solar Cycle, the average duration of which is 11.2 years (varying between 9 and 25 years).

One of the criteria for determining the progress of the solar cycle is the number of spots visible on the surface of the Sun. There are few in the Solar Minimum and many in the Solar Maximum.

Sunspots are the result of intense magnetic activity. The activity is so strong that it slows down the convection ( flow ) of matter and reduces the heat inflow to the surface of the Sun. Thus some areas become less hot than others. This is the reason why we can observe a difference in contrast on the surface of our star. When there are many sunspots, there are many flares and solar storms.

Thus, during solar maximum, solar storms are at their peak. There is a high probability of M and X category solar storms.

Currently, we are close to Solar Maximum, which is expected to be reached between 2023 and 2025. Solar storms and ejections will become very active. Only a small part of the solar storms are directed towards Earth. Nonetheless, the impacts on our environment can still be numerous.

Some consequences of solar flares

The Carrington event is now known as the largest geomagnetic storm on record (greater than X10). It disrupted telegraph services in North America and Europe. There are reports that telegraph lines were energised without any electrical source, that operators were electrocuted and that some telegraph lines caught fire. If this event had taken place today, the consequences would have been much more significant.

The most intense CMEs can produce telluric currents in long power lines, generating voltages and currents of considerable magnitude that can exceed the safety thresholds of grid equipment. In 1989 and 2003, telluric currents caused a local blackout.

A solar flare disrupted the trajectory of an orbiting telecommunications satellite, cutting off all communication with the control station. The IntelSat Galaxy 15 satellite became uncontrollable.

A coronal mass ejection of category M1.05 caused magnetic storms that affected PPP and RTK services in Norway. During this event, known as the St. Patrick's Storm, a significant decrease in accuracy was observed. This is believed to be due to a sharp decrease in the number of positioning satellites taken into account as a result of disturbances in the Ionospheric layer.

40 of the 49 satellites launched by the SpaceX programme did not reach their orbits and were destroyed in the atmosphere.

It was a radio blackout caused by an X-class solar flare that affected the Americas, Southeast Asia and Australia. 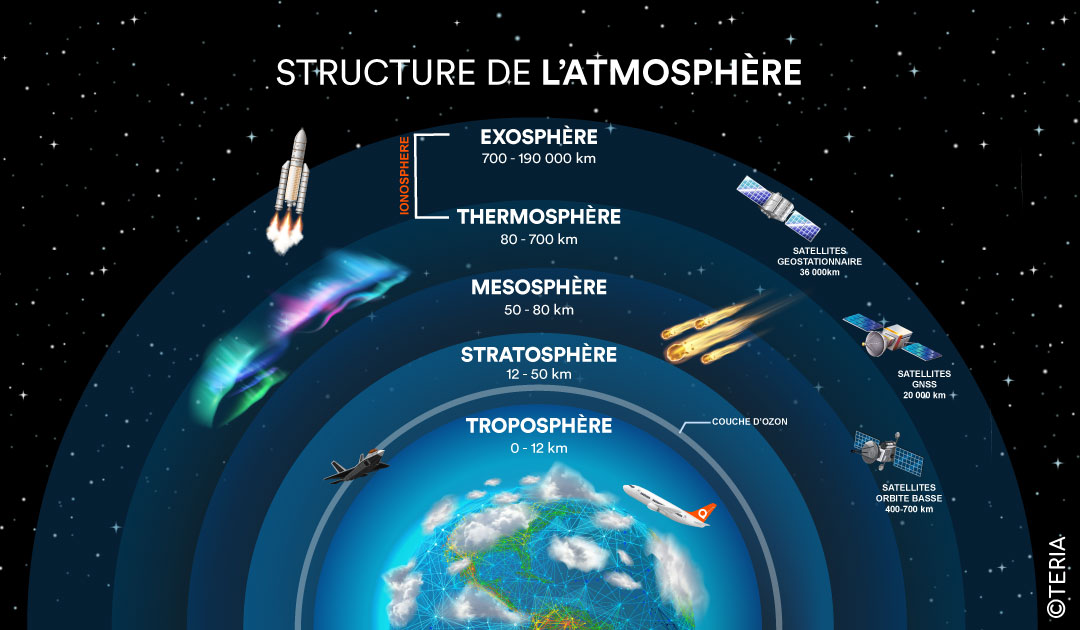 As mentioned above, the solar wind, ejections of ionised matter, etc. cause magnetic reconnections when they reach the Earth’s magnetosphere. This interaction is at the origin of magnetic storms.

These magnetic storms occur in the ionosphere, the atmospheric layer in which satellites operate and from which telecommunication and geolocation signals are transmitted.

In addition to the impact of magnetism on the devices themselves, signal delay due to the ionosphere is one of the main sources of error in GNSS. Sudden disturbances of this atmospheric layer make it a subject of major importance.

To correct for errors related to the crossing of signals in the ionosphere, single-frequency receivers incorporate a model of the ionosphere which may be inadequate during sudden magnetic storms.

As a result, the accuracy of the receiver can be severely degraded and in some cases it becomes impossible to fix ambiguities even on short baselines.

For several years, GNSS devices have been improved by the use of a second signal (L2). With dual-frequency operation, it is no longer necessary to use an ionospheric model. It is possible to use a so-called iono-free frequency by linear combination to resolve ambiguities. This means that there are fewer errors to be corrected in the position calculations. The device can then provide accurate positioning.

Although the issue of ionospheric modelling has been resolved, another issue remains, that of ‘scintillation‘. Strong solar flares, such as CMEs, can generate rapid changes in the phase and amplitude of signals. This high scintillation in the low frequencies can cause some satellites to reject the signal, resulting in a loss of accuracy or the termination of the positioning service of the device.

Practical consequences in the field

During a CME there will be a significant loss of accuracy at the beginning and end of the magnetic storm event. At the peak of the storm, positioning solutions will probably be lost. All receivers remain impacted by ionospheric disturbances. Dual-frequency receivers retain much better accuracy than single-frequency ones.

In practice, ionospheric fluctuations prevent a GNSS receiver from fixing ambiguities. Even if the receiver uses an accuracy enhancement service, it remains in RTK Float mode and can only achieve decimetre accuracy.

Today, many devices are single frequency in mass market products. They are dual-frequency for entry-level and mid-range professional measurement devices.
As mentioned, ionospheric disturbances will continue to increase over several years with a solar maximum in 2024-2025, so it is important to anticipate this factor in the field and provide a solution.

The ionospheric disturbance phenomenon is punctual. It mainly affects the measurements in the middle of the day when the disturbances are most intense. It remains relatively small compared to the disturbances measured at the magnetic equator.
If your device is single or dual frequency, it is consequently recommended to use it at the beginning and end of the day.

In order to identify the most favourable periods of use, TERIA proposes to consult the level of ionospheric disturbance in real time. To do so, you can observe the state of the Ionosphere directly on this article thanks to the module opposite developed by our engineers for Metropolitan France. Soon, a new version will include all countries covered by the network.

You can also download the iTERIA application for more simplicity and have this information at any time on the field.

What to do when surveying in the middle of the day is imperative?

Recently, a new generation of instruments uses several additional frequencies. Their tri-frequency operation, or even quadri-frequency operation in some constellations, provides a crucial redundancy of information to correct errors caused by ionospheric disturbances. Indeed, the use of three or more frequencies makes it possible to identify and eliminate potential measurement errors. The extension of the frequency range improves the iono-free processing while reserving one frequency for control.

The PYX by TERIA, which is equipped with a tri-frequency GNSS card that can be upgraded to quadri-frequencies, belongs to this latest high-end generation. The improved ambiguity resolution provides additional reliability to the measurements. As a result, it is only slightly affected by ionospheric disturbances.

However, even if your device is a new generation, if it uses an N-RTK positioning service that is not :

– monitored by an audit and permanent maintenance of the network to ensure its integrity,

You may not be able to make measurements during ionospheric peaks. Indeed, it is necessary that the corrections include messages to be processed for each frequency.

That is why it is important to check the technical specifications when purchasing your GNSS mobile and to opt for an ISO certified NRTK correction service.
The quality of these two elements will allow you to work with complete peace of mind.

TERIA is ISO certified and meets these quality criteria. In addition to its network of more than 240 GNSS stations (on French territory), TERIA is also able to provide Full GNSS corrections in Europe on all GNSS frequencies available through the associated constellations. Real-time monitoring on our servers allows us to prevent ionospheric events and to alert users.

The All-in-One PYX offer allows you to have a top-of-the-range made in France receiver with all its accessories and with an ISO 9001 and 14001 certified NRTK service.

Please let us know if you are interested in this article and
if you have any questions.

An offer that matches the quality of your work,
at an affordable price!