TERIA offers a wide range of services adapted to its customers’ requirements and according to their business activity. Discover our solutions: the PPP – RTK TERIA service available via the Internet; TERIAsat, the 100% satellite solution GNSS or TERIAmove dedicated to mobile applications.

In addition, we offer an online post-processing service and the download of your Rinex files. TERIA also offers tailor-made training and project management assistance. For further information, please contact us…

TERIA is a precision satellite geolocation service. GNSS positioning provides the opportunity to position oneself with metric accuracy at the global level.

Our service corrects these signals to allow the GNSS receiver to deliver centimetric precision positioning in a few seconds using RTK and N-RTK techniques. To achieve this, we rely on standards such as the NTRIP protocol for data exchange and the RTCM format for the dissemination of corrections.

Corrections are available via the Internet. Our processing servers are in the Cloud to provide you with a 24/7 service.

Find information on the coverage area of this service in the network page. 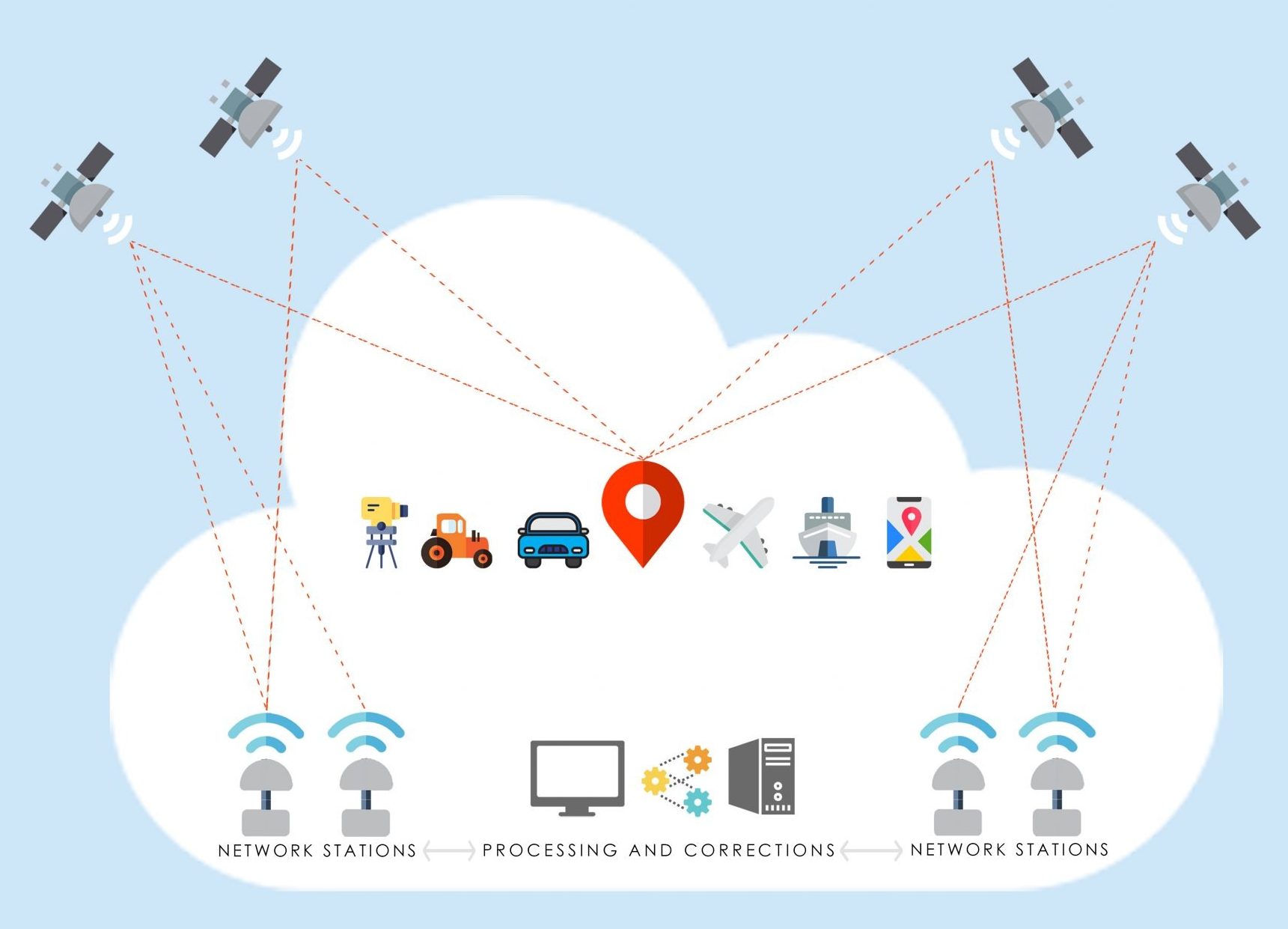 TERIAsat is a service for improving the accuracy of satellite geo-positioning. GNSS positioning allows you to position yourself with metric accuracy at the global level.

Our service corrects these signals to enable the GNSS receiver to deliver centimetric precision positioning in a few seconds using the PPP-RTK technique. A PPP service is available to cover areas not covered by PPP-RTK.
Corrections are sent via geostationary satellites and converted to N-RTK in RTCM format to ensure that the receiver can operate in RTK mode. Corrections can be received either via an external box or directly in some receivers integrating a TERIAsat-compatible L-Band modem.

The iTERIA Smartphone application offers an augmented reality view of the position of geostationary satellites in order to easily identify the masks.

The TERIAmove service allows to meet the precision localization requirements for all receivers whose GNSS antenna is in motion. From precision agriculture, to robotics and drones, this service adapts to these needs in order to provide highly accurate corrections. A very fast convergence time is ensured in order to allow a return to precision after a loss of precision due to important masks (tunnel, parking, link with an indoor positioning system, etc.).

At the technological level, this service makes it possible to combine NRTK and PPP-RTK corrections. This service guarantees the highest availability and allows precise positioning with an integrity calculation. It offers receivers two independent correction flows, in order to calculate two precise redundant positions.

This service guarantees the highest availability 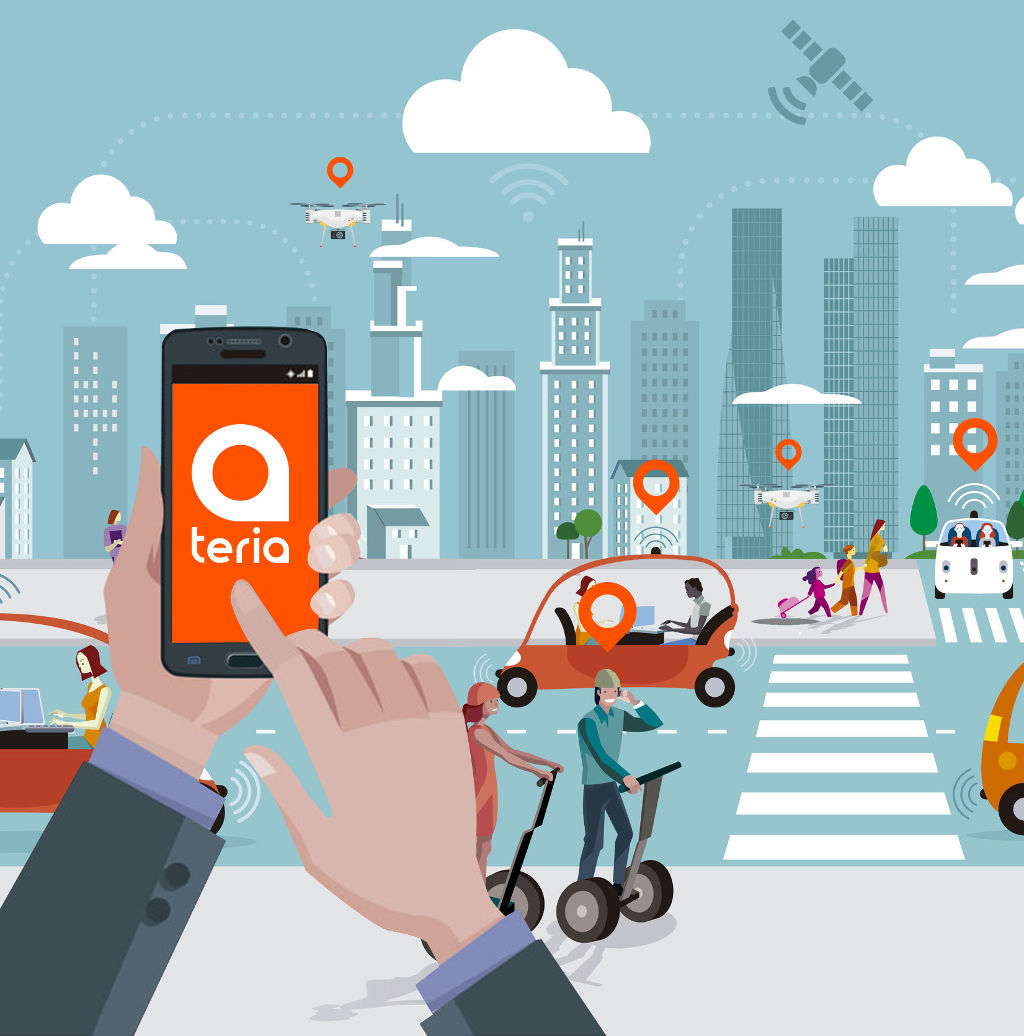 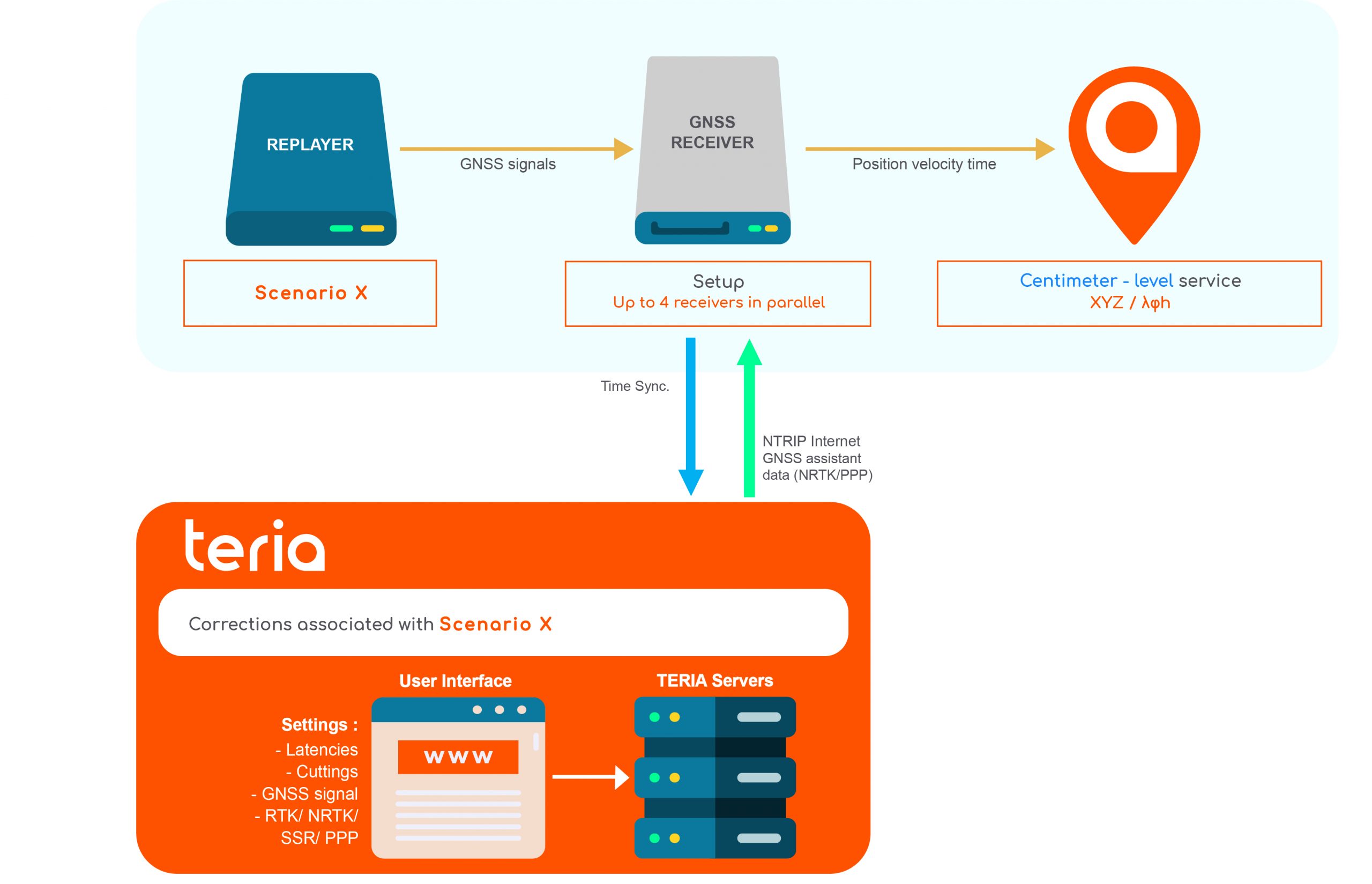 The TERIAreplay service provides a posteriori GNSS corrections for a preconfigured scenario in order to evaluate the performance of one or more GNSS receivers. GNSS replay consists in replaying raw GNSS signals recorded along a scenario for which a so-called reference trajectory (as accurate as possible) has been calculated.

TERIAreplay thus allows the user to configure the correction stream that will be transmitted to the receivers under test, leaving the user the possibility to :
– choose the type of corrections (RTK, NRTK, PPP-RTK),
– choose the number and type of GNSS constellations
(GPS, GLONASS, GALILEO and BEIDOU) corrected,
– choose the frequency for receiving corrections,
– simulate the lack of receipt of corrections over a given period of time.

Thus, the end user is able to qualify the performance of a GNSS receiver over a given scenario, while using TERIA corrections to obtain real-time centimetric positioning.

The standard format for recording GNSS data for post-processing is Rinex.
These files provide for differential treatment of observations made by a GNSS receiver in static or dynamic mode.
From TERIA, it is possible to generate observations for one or more virtual station(s) and thus provide a Rinex file for the entire network coverage area.

Here are two examples of how these virtual Rinex files can be used : 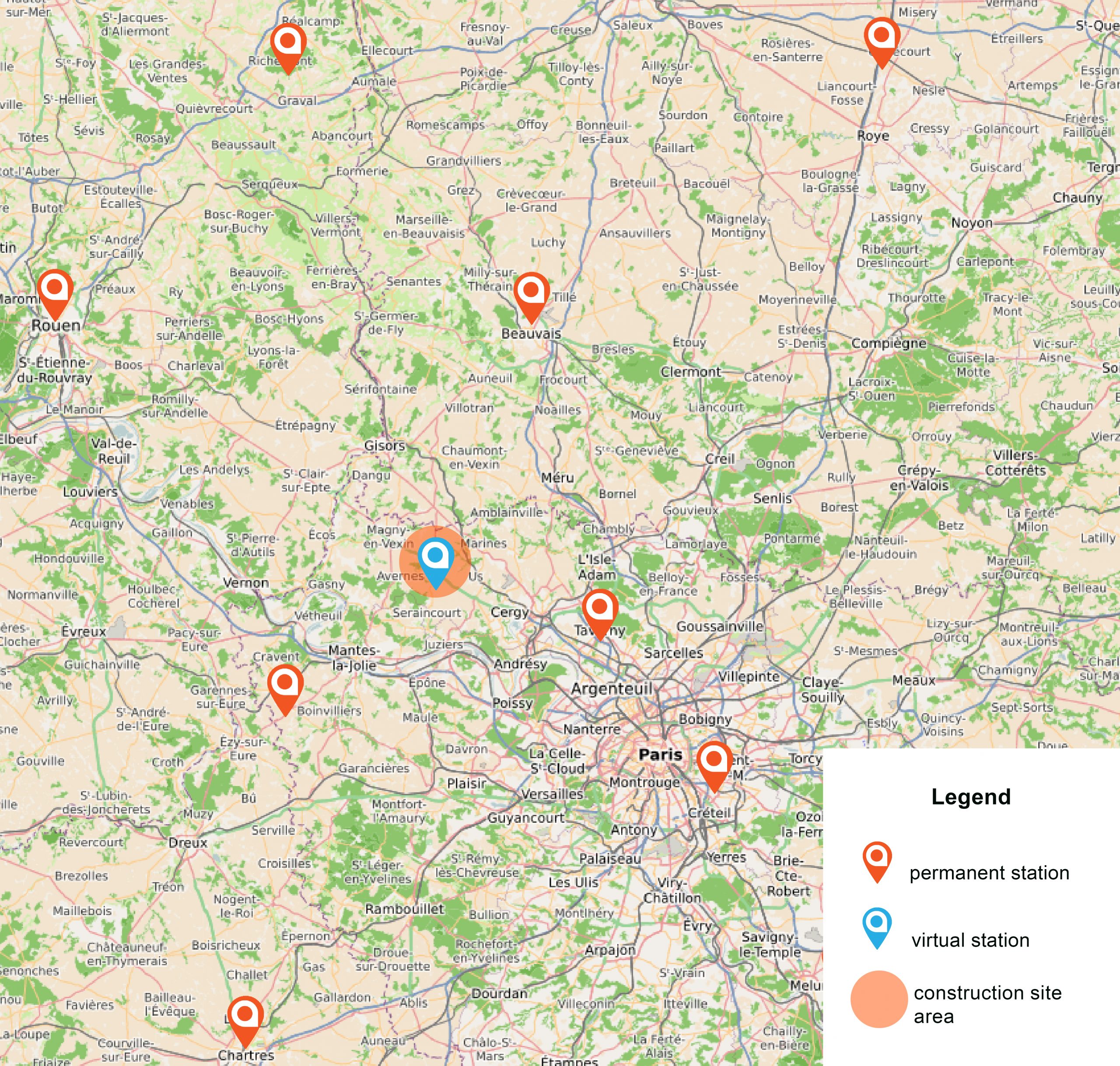 Thanks to its expertise,
TERIA shares its know-how through
a Project Management Assistance.

Ask for a customised solution

Sharing expertise and consulting
with several actors such as
companies, governments or associations.

Ask for a customised solution

Theory and practical training
for optimal use of the TERIA network
as well as the proper operation of the equipment.

Ask for a customised training

High performance hotline support
with a technical team at your disposal
to answer all your questions.

TERIA at the service of high precision

Our solutions are designed for all the professionals in the field of measurement: surveyors, topographers, engineering offices, agriculture, construction, public works, smart city, health care, and sports competitions.

All in all, anyone who needs to be geolocalised to the precise centimetre. 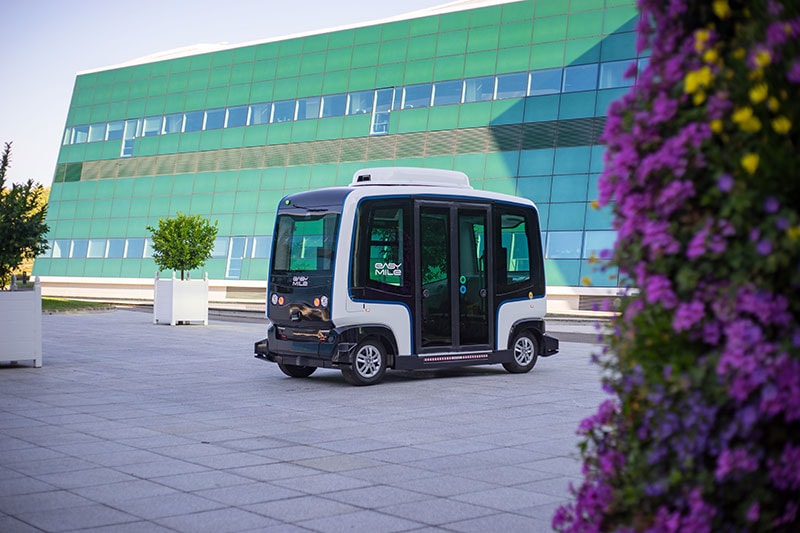 Would you like more information about our services and products ?